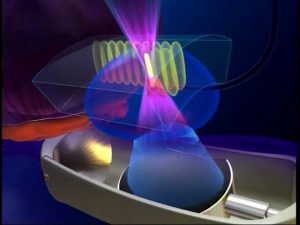 While your cancer may continue to be well-managed with active surveillance, some patients may benefit from the reassurance that their cancer has been treated. HIFU therapy is specific to each patient’s cancer. This allows the physician to treat the areas of cancer exclusively – leaving the areas of the prostate not involved with cancer, untouched. This means less risk of side effects such as urinary incontinence and erectile dysfunction, which are associated with more invasive treatments, such as radiation therapy or surgery.

High Intensity Focused Ultrasound (HIFU) uses ultrasound energy, or sound waves, to heat and destroy specifically targeted areas of cancerous tissue in the prostate. During HIFU, the sound waves pass through healthy tissue without causing damage. However, at the focal point of the sound waves, the tissue temperature rises rapidly to 90 degrees Celsius, destroying the targeted tissue.

The same principles are used when light is focused through a magnifying glass.

With HIFU, physicians have the ability to target and treat a small amount of tissue, which minimizes the damage done to areas around the prostate. This helps preserve normal urinary function and minimizes the risk of erectile dysfunction.

HIFU is a minimally invasive option that utilizes Sonablate® technology. The advanced computer-controlled HIFU delivery device transports the ultrasound energy through a probe placed in the rectum. These waves are then targeted directly at the prostate for accurate ablation and destruction of the diseased tissue.

The HIFU technology consists of a console where the physician plans, monitors and adjusts HIFU treatment, a transrectal probe and a chiller, which is a safety device that keeps the rectum cool during treatment.

The HIFU device uses ultrasound with multiple sensors which allow the physician to both accurately treat and safely monitor the progress of the treatment simultaneously. Due to its accuracy and precision, areas around the prostate are undamaged, which greatly reduces the risk of side effects such as erectile dysfunction and urinary incontinence.

In select cases, HIFU can be used for focal treatment, which is the selective treatment of the cancerous areas within the prostate alone, leaving the non-cancerous portions undisturbed.

The radiation-free treatment is usually performed one time on an outpatient basis but can be repeated as necessary without causing adverse effects to surrounding tissues.

Who is a Candidate for HIFU?

HIFU is most effective for men who have early-stage, localized prostate cancer that has not spread or metastasized outside the prostate.
HIFU may also be an effective therapy for recurrent prostate cancer when patients may not have any other treatment options. Your urologist will discuss the benefits and risks of HIFU, and whether this treatment option is right for you.